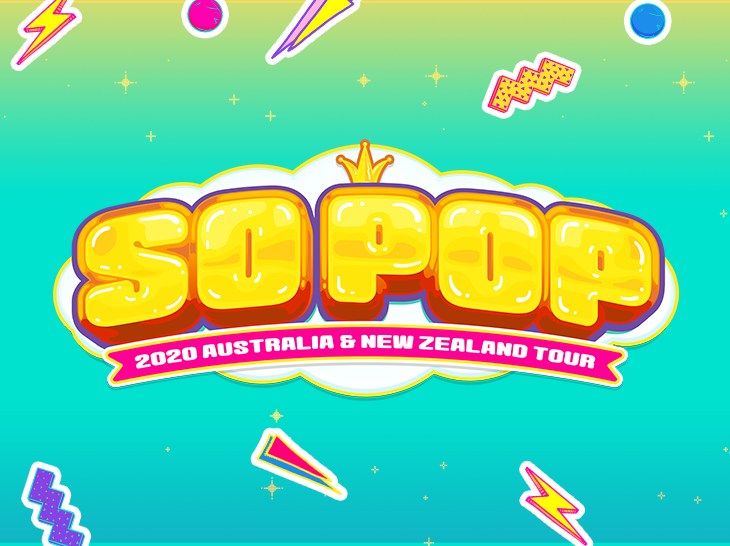 It's time to begin, now count it in… Frontier Touring and Arena Touring are stoked to confirm that So Pop will return to Australia and New Zealand in April and May 2020! The ultimate pop experience will hit Perth, Brisbane, Sydney, Adelaide and Melbourne before crossing the ditch to Auckland and Christchurch, delivering each city an unforgettable night of 00s nostalgia.

So Pop’s 2019 debut was a runaway success, with Aqua, Vengaboys, Blue, B*Witched and more delivering hours of the biggest party tunes fans across our fine countries — watch the wrap-up video here. In 2020, So Pop will bring another line-up of hit-making, record-breaking 00s pop royalty to arenas across Australia and New Zealand. All artists are completely exclusive to So Pop, act quick to secure your spot at the hottest throwback pop concert of the year.

INTRODUCING THE CLASS OF SO POP 2020

I love all my girls so much and cannot wait to show you what we've got in store for you. It’s been a long time coming but this feels like the perfect time to remind the world what it means to be a Pussycat Doll. Nicole Scherzinger

The Pussycat Dolls were last on our shores more than a decade ago supported by an up-and-comer of the time Lady Gaga, and their precision-engineered performance captivated audiences across the nation with anthems ‘When I Grow Up’ (#2, ARIA Platinum), ’Jai Ho! (You Are My Destiny) (with A.R Rahman)’ (#1, ARIA Platinum) and ‘Beep (ft. will.i.am)’ (ARIA Gold). When the Dolls return from hiatus in April and May, the ONLY place to be is the So Pop dancefloor.

I created The Pussycat Dolls back in 1994 and never in my wildest dreams would I have thought it would become one of the most iconic girl groups of our time. I’ve been working on making this reunion happen now for years, so I am very excited that the stars have aligned for THE PCD REUNION! It’s with gratitude to our fans and during this amazing time of female empowerment, to be able to announce the launch of our PCD reunion, celebrating ALL GENDERS, & the brilliant success and talent of the girls that helped influence a movement that was long overdue. Robin Antin (The Pussycat Dolls founder)

STEPS — British five-piece Steps will make their Australian and New Zealand performance debut at So Pop 2020. One of the UK’s most successful pop groups of all time, Steps have sold 20 million records worldwide, received three BRIT Award nominations, a BRIT Award win for ‘Best Selling Live Act’ and performed as part of the iconic ‘Thank ABBA For The Music’ ensemble at the BRITs featuring So Pop alumni B*Witched Responsible for singalong jams ‘Chain Reaction’, ‘Tragedy’, ‘Love’s Got A Hold On My Heart’, ‘One For Sorrow’, ‘Scared Of The Dark’ (#1 UK iTunes) and ‘Last Thing On My Mind’ (#5, ARIA Platinum) as well as the song that started it all, the techno-pop slice of line-dancing genius ‘5, 6, 7, 8’ (#1, ARIA Platinum), Steps will bring their boot-scootin’ best in April. Dance prep starts now!

JESSE McCARTNEY — American singer Jesse McCartney joins the mega So Pop 2020 league with his enchanting stage demeanour about to turn up the heat across the country. After making his start on TV screens in American classic All My Children, McCartney flexed his musical talent when he made his debut in the boy band Dream Street (‘It Happens Everytime’), before venturing solo and releasing off the hook hits ‘She’s No You’, ‘Get Your Shine On’ and ‘Leavin’. Set to make hearts swoon as soon as the opening riff of ‘Beautiful Soul’ (#1, ARIA Platinum) weaves through the arena, don’t sleep on the hottest concert of 2020!

SMASH MOUTH — Californian surf-garage five-piece Smash Mouth will make their return Down Under and are ready to send the So Pop stage into utter meltdown. Frontman Steve Harwell’s hypnotising vocals meshed with crunchy guitar pop, as showcased in undeniable jams ‘Walkin On The Sun’ (ARIA Platinum), ‘Can’t Get Enough Of You Baby’ and the Shrek soundtrack anthem ‘I’m A Believer’ (ARIA Platinum), will send crowds into a frenzy. An arena full of fans singing along to Smash Mouth’s seminal hit ‘All Star’ (#2 ARIA Platinum)? I said yep, what a concept.

SOPHIE ELLIS-BEXTOR — British songstress Sophie Ellis-Bextor will bring her smooth moves to Australia and New Zealand for the very first time in 2020! Ellis-Bextor took over the 00s airwaves with the deliciously epic ‘Murder On The Dancefloor’ (#3, ARIA Platinum), ‘Groovejet (If This Ain’t Love)’ and ‘Get Over You’. Next April and May, Ellis-Bexter will awaken dancing queens across the nation - you’d better not kill the groove.

ALICE DJ — Dutch trance-pop project Alice DJ will bring contagious dance beats to the So Pop stage, mixing their biggest hits ‘Back In My Life’, ‘Will I Ever’ and ‘Better Off Alone’ (#4 ARIA Gold) to celebrate the best dance anthems of the 90s and 00s.

WHIGFIELD — Danish artist and producer Whigfield will transport crowds to the Eurodance generation with her global smash singles ‘Sexy Eyes’ (#6, ARIA Platinum), ‘Think Of You’ and ‘Saturday Night’.

REEL 2 REAL FEATURING THE MAD STUNTMAN - American electro-reggae duo Reel 2 Real will be joined by The Mad Stuntman at So Pop 2020 with their boisterous energy commanding crowds and making bodies bounce to their classics ‘I Like To Move It’ and ‘Go On Move’!

SAMANTHA MUMBA — Irish diva Samantha Mumba rounds up the all star class of So Pop 2020. With heartfelt jams ‘Gotta Tell You’ (#3, ARIA Platinum), ‘Baby Come On Over’ and ‘Always Come Back To Your Love’, Mumba’s tight tunes will kick the So Pop stage into gear in 2020 so you better strap yourself in.

Think it can’t get any better? As if! The So Pop 2020 resident DJ, global pop sensation Rojdar (‘First Sight’) will be spinning the biggest party jams in-between these huge acts at all shows plus joined by DJ Tigerlily (‘Paradise’) (AU only) to keep crowds dancing from the moment the doors open until the last mic drops! Stay tuned to find out who your host with the most will be for the second installment of So Pop!

So Pop 2020 is THE pop concert on your to do list. Dust off the butterfly clips and get your choreo together because if 2019 is anything to go off, So Pop is about to transform each city in the greatest school disco the Southern Hemisphere has ever seen.

So Pop 2020 will be fans’ one and only chance to catch this lineup of 00s pop royalty perform all their hits live on one stage! Tickets go on sale from Monday 9 December (11am local time - Australian shows / 1pm NZDT). Don’t miss Australia and New Zealand’s ultimate pop throwback experience! 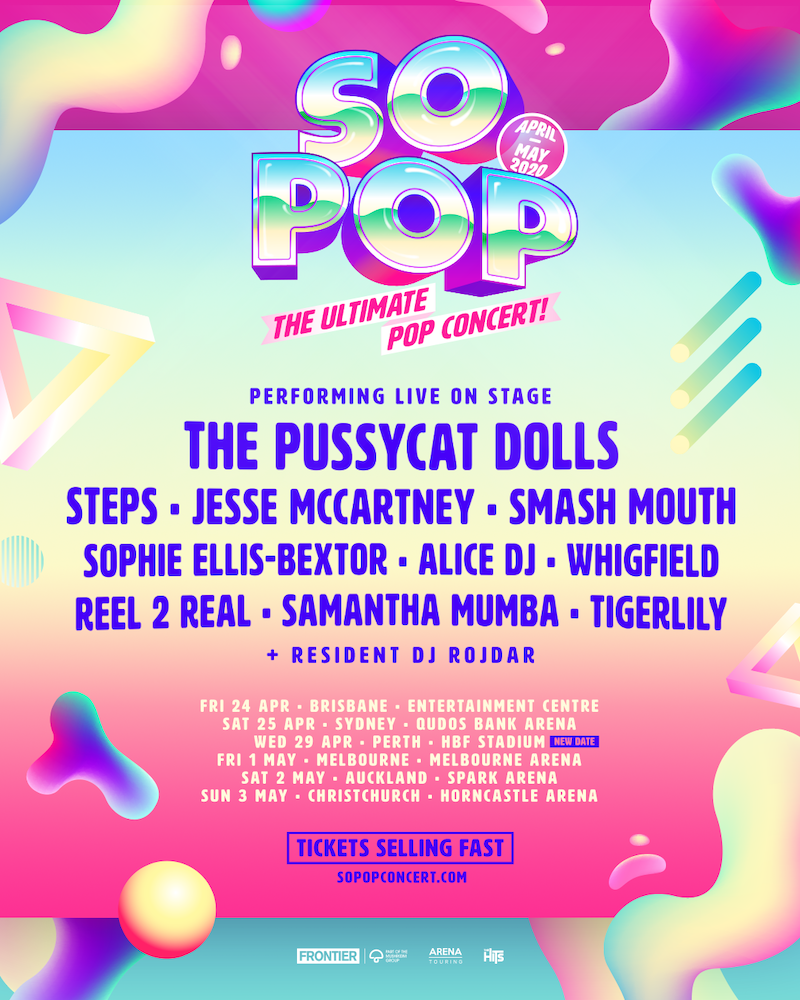